In 1998 Section 4432(a) of the Balanced Budget Act (BBA) of 1997 modified how skilled nursing facilities are paid for Medicare SNF services. This was titled the Prospective Payment Services (PPS) program which replaced the fee-for service payment program. The affect of PPS was to drive most public National Nursing Home Corporations into bankruptcy. Many went private and some merged. The PPS was somewhat based on the 1980s hospital drug related grouping (DRG) Medicare payment regulation that moved hospitals from a cost plus model to a model based on the disease(s) a patient was receiving treatment. The SNF programs was based on Related Groupings (RUGs). Sun Health Care Group declared bankruptcy and eventually stopped the funding of the SHS Software development and SHS was sold. Sun Health Care Group was ultimately acquired by Genesis Healthcare.

American Health Care Association (AHCA) which represented over 10,000 of the 16,000 skilled nursing facilities (SNF) had a problem as it's members were going bankrupt an the PPS program had a forecasted plan to continue to reduce the RUGs to point where care in SNFs was unsustainable. The CEO of AHCA, General Chip Roadman, MD, USAF Retired Surgeon General formed an Committee of AHCA members to save LTC and asked John Derr to be the AHCA executive to manage the Committee for AHCA. John accepted the challenge and moved his office to Washington, DC later becoming the Executive VP (COO). Though the guidance of Dr. Roadman the planned payment declines were stopped and eventually a fair payment reimbursement system was approved which enabled the LTC Sector to recover. Yet, to this day, Medicare and Medicaid reimbursements continue to decline in relationship to the increased regulations that have to be followed as the Center for Medicare and Medicaid continue to manage this sector through regulations and penalties.
In 2004 President Bush issued an Executive Order to digitize the US healthcare system. The Executive Order (EO) established the sub-cabinet Office of the National Coordinator (ONC) of health information technology (Health IT) under the Secretary of Health and Human Services (HHS). John F. Derr  attended the Press Conference announcing this new National Healthcare initiative meeting as the representative of the long term & post acute care (LTPAC) healthcare segment and the elderly. At the Press Conference, then Secretary of HHS Tommy Thompson asked John to coordinate long term care Health IT. This began a long venture for John in ensuring that ​the care providers of post acute care and their patients were represented in the new new world of Clinical Technology and that then other two healthcare segments (Acute Care - Hospitals and Ambulatory - Physicians) recognized the value of LTPAC providers and Information Technology Developers.

At the time (2004) of the signing of the EO the Democratic controlled Congress only provided minimum funding to the new ONC department and the first Director of the ONC David Brailer, MD. John met with Dr. Brailer and told him that LTC was third priority to hospitals and physicians. John told Dr. Brailer that I did not like the third priority but understood. John also told him that when he was ready to hook up the LTC community of care that the community would be ready.

After the Press Conference and the meeting with Dr. Brailer John met with the not-for-profit association AAHSA (Now LeadingAge) and the American Health Information Management Association (AHIMA) to form an informal group of LTC associations to, as a group, represent the sector to ONC. In 2005 the LTC HIT Collaborative was formed (see the page "About" on this website). In 2005 the first LTC HIT Summit was held in Chicago where technology issues of the LTC Sector were discussed. In June 2016 the twelfth Summit was successfully held. This is the only summit where issues of the long term post acute care sector are discussed. All other technology summits and meetings in the US Healthcare market have a physician and/or hospital focus. ONC and the LTC HIT Collaborative worked together on Strategic Plans and actions we could achieve with a limited budget. LTC still fighting reductions in reimbursements.

Not much was done until 2009 when the American Reconstruction and Reinvestment (ARRA) Legislation was passed under President Obama. Within the ARRA was the HITECH Act which funded hospitals and physicians to upgrade their electronic health records and digital infrastructure under "Meaningful Use" (MU) substantial financial incentives ($5 Million to each hospital). MU had many requirements in order for the qualified participant (QP) to receive their incentives. The major exemption to the HITECH Act was that LTC, Behavioral Health, and a few more providers were left out of the incentive program. This was a major exclusion and error by the President and the Democratic Congress as LTC and Behavioral Health are major providers to Medicare patients with co-morbidities requiring chronic care. LTC was also the sector with the least funds to invest in new technology.

The HITECH Act established two Federal Advisory Committees to oversee the HITECH Act and to assist the ONC and the now fairly large ONC Department in their implementation of the Act. The objective of the HITECH was to develop a healthcare system based on Person Centric Electronic Longitudinal Care with a focus on wellness and prevention of incidents measured by clinical value. This would, in the Medicare and Medicaid world replace fee-for-service with a valued care system based on the electronic health record, electronic medical record, and personal health record (EHR/EMR/PHR)

The Federal Advisory Committee on Policy (HITPC) and the federal Advisory Committee on Standards (HITSC) were formed. John Derr was selected to be a member of the HITSC in 2009 and was the only person representing LTC on both Committees. This was the foresight of the ONC to recognize that LTC was part of the Spectrum of Care even though this sector of care was not part of the HITECH Act. John has served as the only long term post acute care (LTPAC) representative from 2009 to 2016 when his term was over and he was replaced by Dr. Terry O'Malley, MD of the Boston Partners and Harvard group. Terry is an expert in LTPAC and will carry the ball forward. Today there are also other LTPAC oriented members of both the HITPC and HITSC as it is now recognized by Congress, CMS, and ONC that LTPAC Is a valued provider in the spectrum of care with new care models and payment models under the person centric electronic longitudinal care model.

In 2010-11 when John Derr was a trustee of the CCHIT (1st organization to certify electronic health records) a group representing all aspects of what then was called long term care (LTC). LTC had become associated as representing skilled nursing facilities when there were many providers of post acute care. The term long term post acute care (LTAPC) was then adopted by the community as representing all members. The LTC HIT Collaborative then changed it's name to LTPAC Health IT Collaborative.

It is not the purpose of this website to provide specific information on the HITECH Act or other healthcare legislation and regulations that are being implemented or are proposed of which their are many. The website (https://www.healthit.gov) is very informative and all should be on this site subscription list.
OBJECTIVE OF THIS WEBSITE: This website is about today's healthcare and the opportunities available to healthcare corporations and providers as we move from an Episodic Healthcare System based on fixing a clinical problem with a hospital stay to a Preventative Healthcare System with a focus on the individual or person; preventative care; and wellness. JD & Associates Enterprises, Inc addresses the issues concerning this change in the US Healthcare System from the perspective of LTPAC. JD & Associates Enterprises, Inc. is not only one person but a network of healthcare experts that can provide guidance to both domestic and international entrepreneurial start-ups, small companies, large corporations, associations, and government agencies. After the visitor of this website reads the CV of John F. Derr, RPh they will see the hands on experience he has had and the network of associates that covers almost every facet of healthcare. 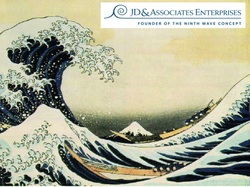 NINTHWAVE CONCEPT BUSINESS MODEL- Current major focus of JD & Associates Enterprises is to use John Derr's over fifty years of broad healthcare experience plus the business associates members of the Ninthwave Concept Business Associates in the implementation and harmonization of clinical medicine and health information technology to improve clinical outcomes, quality care, and quality of life of the elderly and disabled throughout the Spectrum of Care. The focus will be on both the Federal and Commercial sectors of care and the value proposition of the long term and post acute care (LTPAC) healthcare sector.
​
The business model is the Ninthwave Concept. That is, to recognize the clinical and business healthcare trends as well as direction of the Legislative and Regulatory agencies are pushing healthcare. Then to project the end objective and then recognize the future wave (the Ninthwave) or vision. Logic plays an important roll but it is not just placing a finger in the air to check the wind. It takes knowledge, experience, data, and analytics. (See About Section of this Website)